Eleven Years Since 9-11, a Commemorative Poem

In recent years I've written essay after essay. I haven't written a poem, I think, in decades,  until today, the 11th Anniversary of 9-11. 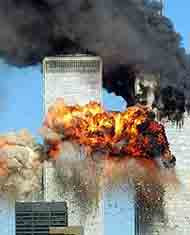 
Above my porch today,
as bright a blue and cloudless sky


as the crystalline view through my classroom window,
eleven years ago,


Second period of that past brilliant day,
a gangly group of sophomores held, for the first time


the story of the Finches: Scout, Jem and Atticus,
in their hands.


At my classroom door,
a teacher on hall duty appeared.


“ Did ya hear?”  he, by nature not an interrupter, asked.
“A plane has crashed into the World Trade Center.”


“How unlucky:
a misguided plane,

the business men and women,”
I remarked, before,


back to our paperbacks, I continued to read aloud  how


“Maycomb County had recently been told that it had nothing to fear but fear itself,”
on page 11.


And before I could finish Chapter One
of the  American classic


the not-by-nature-an-interrupter
appeared at my door again


with news of a second plane,
calling  crash number one

a chain still reacting as he spoke.


And  I, a rarely-deviate-from-the-lesson sort of instructor,


switched from the planned introduction of classic fiction


to the live drama of Brokaw on the classroom TV
designating the Big Apple  the epicenter of epic tragedy.


A grandmother now,
I sit on my porch 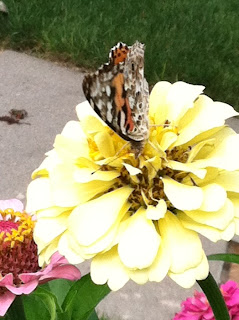 and gaze at the similar  blue heavens,


filled with the swirling smoke and ash of buildings and human debris.


” Never again,” I  pray,
compelled to linger by this September's fading zinnias,


hoping that the butterflies will still come.