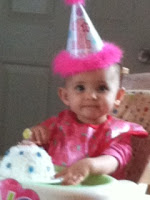 I recently attended my grandniece’s first birthday. It occurred to me that sociologists should take a closer look at the first birthday party. It is, after all, a prevalent ritual that involves hours of preparation by adults, for a celebration in honor of a tot who has absolutely no idea what the fuss is all about.  Let’s face it –Baby’s First Birthday Party is really for the Big Guests  in the room. We arrive with expectations.


We expect the one-year-old to be baffled by all the bother. We expect the one-year-old to be able to withstand every cell-phone owner’s command to “Look at me, look at me,” as they multi-task their communication gadgets to seize the moment in each phone’s photo stash. We expect some fussiness from the guest of honor. And we expect a mess. Actually,we demand one, as the first-birthday-child is introduced to Birthday Cake.

My grandniece had her own little cake. a mini-me version of an enchanting Cinderella cake we adults sliced into. A Disney doll, the size of a Barbie doll (I’m talking height here) poked through the middle of a dome-shaped cake - frosted to look like the full skirt of a flouncy ball gown. A short doll and cupcake comprised the guest of honor’s personal confection. 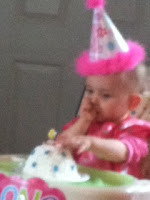 This is when first-birthday-fun really begins. Messy fun, as  a dessert that looks as if it’s been assembled in a Willy Wonka Factory is placed before the child, all sugary and deeply frosted.

Consider, a year ago, same child started on breast milk or formula. Through the months, bland cereals, mushy veggies, and mashed fruits were slowly introduced. Maybe, just maybe, by the time this red-letter day comes to pass, said child has played with (more than eaten) shreds of cheese or carrots.


What’s the child to do with this newfound repast?


I’ve seen child/cake interactions that make barbarians at  Medival banquets look downright reticent. But my grandniece chose to remain as dainty as Cinderella at the Ball. She gazed at the cake, curiously. She looked at us. She repeated this back-and-forth once or twice. Eventually she touched the icing. Just lightly. She was all about being the lady, much like Queen Elizabeth at her Jubilee I expect.


But Queen Elizabeth did not have a gallery of relatives shouting for her to dig in. Nor did an adult take Her Majesty's hand and moosch it through frosting and cake. That was all the one-year-old needed before she began to, let’s say, get at it. At least enough for us to brag that she had accomplished what we all came to see. 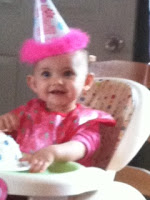 Looking forward to the Wrapping Paper Massacre a year from now.
Posted by Laura B. Hayden at 6:00 PM