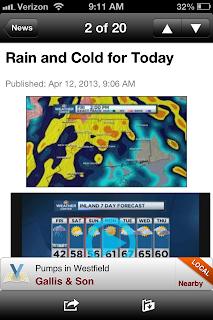 I've been busy trying to wrap up winter. Trouble is, my first  attempt - March 21 -  the temperature froze any thought of clearing a garden bed or two. Then, a week after a sunny but chilly Palm Sunday (on which my 8-month-old grandson was baptized) Easter morning rolled in  with more of a Jack Frost than Easter Bunny overtone.

April fooled me further with more extended low temperatures. And now, after too brief a reprieve, I've got the heat on again as I watch a  cold heavy rain fall outside.

My daffodils and tulips are clearly confused.

But, pretty soon, I expect, I will be able to conduct my yearly spring ritual. That would be greeting the true signs of spring  with a quick recitation of the prologue to Chaucer’s Canterbury Tales. In Middle English. The Middle English that comes between Old English (incomprehensible) and Shakespearean English. The passage  looks both strange and familiar in its homage to springtime.

Whan that aprill with his shoures soote
The droghte of march hath perced to the roote,
And bathed every veyne in swich licour
Of which vertu engendred is the flour;
Whan zephirus eek with his sweete breeth
Inspired hath in every holt and heeth
Tendre croppes, and the yonge sonne
Hath in the ram his halve cours yronne,
And smale foweles maken melodye,
That slepen al the nyght with open ye
(so priketh hem nature in hir corages);
Thanne longen folk to goon on pilgrimages,
And palmeres for to seken straunge strondes

Can you detect the hints of spring in those lines?

We'll see how well you did tomorrow.

In the meantime, take a look at what the best little theatre group in Boston, MA is up to: