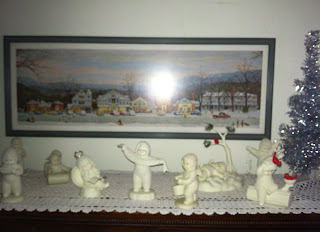 Snow that doesn’t stick is my kind of November snow. I think of it as confectionary sugar snow because most of it disappears, the way powdered sugar melts into a cake top that isn’t entirely cooled. After the cake loses its oven warmth, a light dusting – maybe through a pretty stencil – is just enough to perk up the presentation a bit . A case of less being more, like November snow.


My preferred dusting would work for skiers too. Even though little or no snow would have accumulated – outdoor temps would be cold enough to fill ski resorts with snowy trails.


Confectionary sugar snow eases me into the changing winter landscape. It reminds me that the view out my window is about to turn to monochromatic grays. That’s a pretty drastic change from summer’s multicolored gardens and fall-blazing trees. We try to brighten up the graying of city and countryside with a pop of holiday color here and there, but it takes a knack to keep the ornamentation from getting too kitschy, if you know what I mean.


If I could plan the winter snow the way I plan out a course syllabus, I’d start with a (preseason) late November dusting followed by an inch or two, a week or so later. Just enough to cover errant oak leaves that continue to fall through the winter. Roads would still be passable  (like my course!). Make-up days would not have to be added on to the school calendar.


Christmas Eve – let it snow. There are carols in the air and the spirit of a blessed birth in our souls. Why not cover the outdoors  in a blanket as pure as the Christmas story as families nestle around fireplaces and into their warm beds?  Santa’s sleigh out-maneuvers  any weather. The rest of us can stay put. That is, if we are not essential  hospital or transportation workers. Added Christmas Blessings to them - every one.
Just after the holiday, most of us could make do with a Norman Rockwell kind of snowfall through late December. One that keeps the  landscape white, but the roads safe.  I like to think of that last week of the year as a designated “reading” week, up to – but not including New Year’s Eve.


January??? Wouldn’t mind a prolonged thaw while the mountains stay just frigid enough for snowmaking.  A true blue storm could pass through February's President’s weekend. A last hurrah for winter. Sort of a final exam on getting through the elements of accuweather.


Then I’m ready for an early Spring break from Winter's course.