If you were a fan of MOMMYOFTHEBRIDE . . .

Find Laura's new blog posts at lhayden.blogspot.com. Sign up to follow the new site today.
Posted by Laura B. Hayden at 12:10 PM No comments:

If you were a fan of Laura's Mommy of the Bride blog,  sign up to follow her at lhayden.blogspot.com.
Posted by Laura B. Hayden at 11:58 AM No comments: As performers know so well, timing is everything. Yet the final and dark act in Robin Williams’ life performance seems so misplaced. Even as the news of his death spread last night, I expected to see him pop up on maybe, a late-night TV show to assure me he was just pulling my leg. Alas, Letterman and Fallon ran reruns. This was no joke.

Besides paying him tribute for the wit and wisdom his performances have gifted me, I am compelled to think about all the talented men and women in my life who have that enviable ability to light up and even take over any room they walk into. Those whose energy often energizes me. And I realize Williams’ last act may actually be more important in getting me and the culture to understand how overpowering depression and addiction can be to those whose energy seems endless. I promise not to forget this. 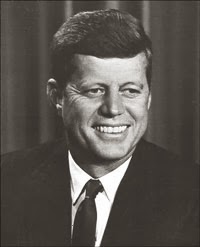 November 22, 1963. I was in my high school freshman English class when the principal’s voice came over the intercom – sounding weaker than his usual bellow, yet ever more serious. When he got to the part about President Kennedy having been shot in Dallas, my teacher (a very pretty, very self-assured young woman rumored to be dating a NY Giants football player) literally fell into the chair behind the teacher’s desk. She didn’t look so pretty or seem as socially legendary anymore. She slumped and quietly cried. She could not speak. The principal had said enough, ending with instructions for an early dismissal – which got me home within minutes of Walter Cronkite’s iconic controlled yet emotional delivery of the official news that the President was dead. This was the first time I experienced the world around me shutting down and remaining hauntingly still – a stillness and shock that would last hours through the news of Officer Tippit’s death and the return of the Johnsons and Kennedys to D.C. -  and continue through the days  we watched Ruby shoot Oswald – in real time -- on a boxy black-and-white TV in my living room, and then the  funeral.


November 22, 1963. That is the Friday in November I have always associated with the seasonal tag – Black Friday – never the shopping day after Thanksgiving. This Black Friday actually precipitated the closing of most stores – through the mournful weekend and funeral – all of which draped their window displays in black fabric, festooning the official photograph of the  President, smiling broadly, contrasted only by the red, white, and blue of an American flag.
Having the entire world stop and then remain still for some time was different than the way family and dear friends drop out of the  otherwise unaffected flow of the universe for a few days, grieving the loss of a close relative or friend. Through the fifty years since then I can count on one hand the other times I’ve felt that extended collective pause: September 11, 2003, January 26,1986 and December 14, 2012. Three too many.
Posted by Laura B. Hayden at 6:19 AM 1 comment:

My summer started, with my expectations of city folk about to be derailed.

I boarded an Amtrak business car (I was on business after all!) at 6 AM, a tad nervous about the trip that lay ahead. By 9:30 the train pulled into Penn Station. I've been in and out of Penn Station before, but never wielding wheeled luggage and a stuffed shoulder tote. Still I maneuvered pretty steadily onto the  up escalator that brought me out of  underground Penn to the city's heavily  shadowed daylight

I walked ‘bout a half mile up 33rd Street to Broadway, locating the hotel I‘d booked for the night. Only catch – check-in wasn't until four.  With a suitcase mostly filled with books (I’d be attending the New York Book Festival tomorrow – in the same hotel) and two business-casual-changes folded in the large shoulder tote, taking a bite out of the Big Apple on arrival day wasn't going to be easy. Crowded New York street crossings are not suitcase-on-wheels/stuffed-shoulder-totes friendly. Conventional wisdom told me throngs of city dwellers and workers weren't necessarily friendly on a number of levels, no less on the corners of their congested streets.

But there I stood at the revolving door of the hotel. The doormen looked more business-like than polite as they waved guests in and out of the threshold’s spin-around. Yet, it wouldn't hurt to go in, I thought. I'd ask if there was a place I could leave my baggage until four (even as I questioned how secure is secure behind the front desk of a big city hotel). I waited in line for my turn with a desk clerk. A sympathetic desk clerk I hoped.

“I’m booked here for tonight,” I explained. “I was wondering if you had a place I could –“

“Name,” she interrupted.So much for sympathetic.

I gave my last name. Almost immediately she followed-up with my first. Then asked for a credit card. Her fingers clicked the keyboard, her eyes glued to the computer screen

“Your room is ready,” she announced. 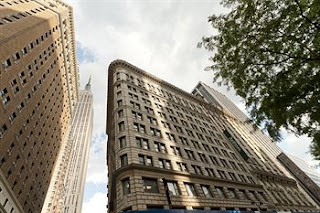 “Christmas in June,” she remarked, then cracked a smile.  “The first elevator will take you up to 18. It’s the highest level,“ she said as she handed me my scan key.

“Even better than Christmas in July,” I said. “Thank you so much.”

I headed for the only elevator that went to the top level, and said a silent prayer there’d be no fire !

This Little Writer Goes to Market

If you read Mommy of the Bride regularly, it’ll come as no surprise that I enjoy writing and blogging observations and family stories. The flip side of  freelance writing  is marketing the material. Not so much my cup of tea.

Fresher analogy: If " writing" were my baby –marketing would be akin to diapering the kid.  Essential, but not so pleasant. At least not until after the initial step.

Now, almost two years after publishing my memoir Staying Alive: A Love Story, this little writer is going to market once again.  The endeavor takes great planning, and then getting here and there to (the best part) readers and professionals in the book industry.

If you are near the here and there I’ll be showing up at, join me for a chat, a talk, a reading. Through the summer I’ll be in NYC, Connecticut, and Massachusetts.

There are more CT and MA visits coming in September too.

And while I’m in marketing mode – allow me to ask a favor. If you've read the memoir, please take a few minutes to leave a short review on the book's Amazon , bn.com, or Goodreads site.

Thanks to all  MOTB and SA:ALS  readers. I’ll be back from market with stories and observations soon enough.

Moms Have Ways of Finding Out!

I heard it through the grapevine – and you know how those grapevine sound bites go. You’re never quite sure where the truth ends and the embellishment starts. Yet, as much as the word-of-mouth nearly knocked me off my feet, it made all the sense in the world.


The news item involved my son and his high school buddies. They were – still are – a like-minded crew and even though it’s been eight years since they graduated together, this crew has stuck together through many stories their mothers have heard as well as ones we haven't, along with the  miles that separate most of them today. Between high school and post-college days some of them have occasionally lived together (a few still do), continued to play in an adult soccer league together, and made a ritual of their annual summer weekend at Lake Sunapee. Those who have settled in South Hadley and Boston and even as far away as Pennsylvania and Virginia have simply made their relocations places for the others to visit. Regularly.


Not terribly unusual – and I’d say it’s a fairly low-risk bet these ties will continue. But here comes the part that caught me unawares. That made my mouth drop and gasp, “My son? And yours? Really!”


I heard it from one of the other boy’s mom, the mom who for years now, has so graciously cooked up a storm and, I understand, steered the speedboat on Sunapee every summer while the crew took turns water skiing and tubing their way around the lake. That is, when the crew  was not otherwise engaged in some clandestine activity  - like fashioning a newfangled floatation device from a recycled lawn chair they'd attached to wooden runners.  A contraption that, when it did stay afloat tethered to the speeding motorboat, caused quite a stir on the Sunapee shores. Yes, that’s the direction these young adults’ minds tend to go given some idle time –  the engineers and entrepreneurs’ workshop more or less.


Anyway, an official  letter had gone to the Sunapee-speedboat-driving -mom’s house , since the former high school of these boys and one girl (as I heard it) had her son’s home address on record.


“If the letter didn’t come to the house, I probably would not have known either,“ she admitted. Yet, alas it had -  with very specific information about where each of these friends were  to report and at what exact time – for the presentation, she explained.


I was clearly confused until she said, “They’re giving a scholarship.” You could have knocked me over with a whistle as she continued, “A scholarship to a student going on in science - in  honor of their high school science teachers. “


Why, those rascals, I thought – eight years out of high school, all (fortunately) employed and  now pooling their resources– as a way to thank a few Misters and Misses who nurtured their (and I say this in a most complementary way) nerdy adolescent minds.


That's the way I heard it, anyway.

Texted my son after getting the word on the street. 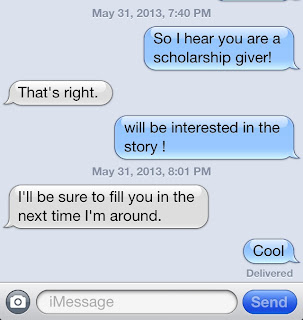